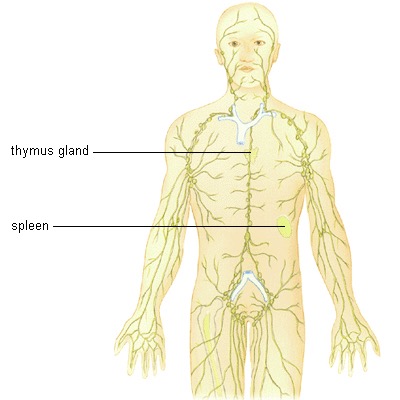 At any given moment throughout life, our body is exposed to a large number of damaging influences such as radiation, toxins, and microorganisms such as bacteria and viruses. A further danger is posed by diseased or deformed cells of the body itself.

To combat these influences, the body has defense systems designed to protect it. An important component of the immune defense system is the lymphatic system.

The lymphatic system is a vast and complex network that circulates fluids around the entire body. The body fluid transported through this system, the lymph, is rich in lymphocytes and proteins and is quite similar to blood plasma.

Large concentrations of these cells are found in the lymph nodes. In case of an infection, their level of activity is raised. They proliferate and enter the bloodstream in higher numbers. External evidence of this process is observed in swollen lymph nodes (glands).

The lymphatic vessels also transport substances that should not or cannot enter the bloodstream, for example fat from foods and particles that cannot penetrate capillary walls such as bacteria, tumor cells, toxins and waste products.

Even before birth, the body has a number of defense mechanisms to protect itself from these dangers. The resistance to toxins is based on natural protective mechanisms such as skin and mucous membranes as well as cellular defenses in the form of various “defense cells.” The immune defenses of the body can be weakened by external stressors such as exhaustion, a poor diet or stress, etc.

The lymphatic organs consist of a network of lymph capillaries. These form lymphatic vessels, which run parallel to the veins, transporting lymph in collective vessels. The lymph consists of some blood and other body fluids and is a cloudy, milky liquid. There are numerous lymph nodes interspersed throughout the lymphatic system that act as filters. For example, they retain any infiltrated bacteria.

Lymph nodes, which have a round or bean-shaped appearance, not only filter the lymph, they also form the lymphocytes (white blood cells). Lymph nodes are found in the neck, groin and hollow of the knee.

The lymphatic system is comprised of several organs. They are divided into primary and secondary lymphatic organs, depending on their function. The primary organs include the thymus and the bone marrow, because they are responsible for the formation, development and maturing process of the immune cells. The secondary organs refer to the lymph nodes, lymphatic tissue of the mucous membranes, the tonsils, intestines, appendix and the spleen.

The thymus is a primary lymphatic organ. It is a two-lobed organ behind the sternum and extends down to the pericardium.

The thymus is particularly well developed in the newborn and growing adolescents and is most active up to the end of puberty, after which it recedes and degenerates.  During its active phase, the thymus is approx. 2 inches long and 1 inch wide.

The T-lymphocytes, which constitute 75% of the blood lymphocytes, are formed in the thymus. The T-lymphocytes are the carriers of the cellular immune system, i.e. the body’s defense against mutated cells (tumors), exogenous cells (transplants) and viral, bacterial and fungal infections. The blood transports the T-lymphocytes to the secondary lymphatic organs (spleen, tonsils, lymph nodes), where they perform their intended tasks in the immune system.

Foods to consider adding to your diet for supporting the immune system are:

Herbs that can be beneficial for the immune and lymphatic systems are:

Often there is more than one issue going on in the body at any one time.  Everything is connected and sometimes the body needs to work in a prioritizing sequence. Don’t be alarmed if multiple supplements are suggested.  It can be very beneficial to support several different systems and organs of the body as we assist it to heal.