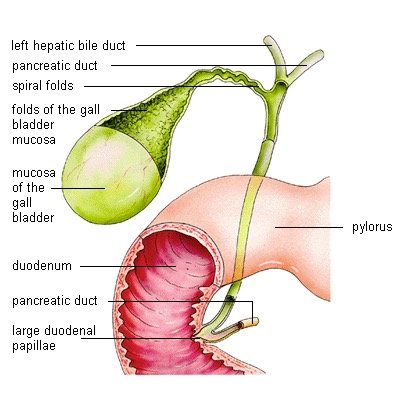 The gallbladder is a 3-4 inch pear-shaped organ located on the right side of the body, directly under the liver.

Bile contains cholesterol, bile salts, lecithin and other substances. The bile emulsifies (disperses into smaller globules) fats so that they may be digested. One of the functions of the liver is to remove poisonous substances from the blood so that they can be expelled from the body.  The liver excretes all these gathered toxins which are then mixed with bile.

Abnormal concentration of bile acids, cholesterol and phospholipids in the bile can cause the formation of gallstones. When a gallstone is pushed out of the gallbladder it can lodge in the bile duct and cause nausea, vomiting and pain in the upper right abdominal region. These symptoms can often arise after a person has eaten fatty foods. Gallstones can range from the size of a grain of sand to larger than a pea. 75% of gallstones are cholesterol while the remaining 25% are pigment stones. Pigment stones are comprised of calcium salts. 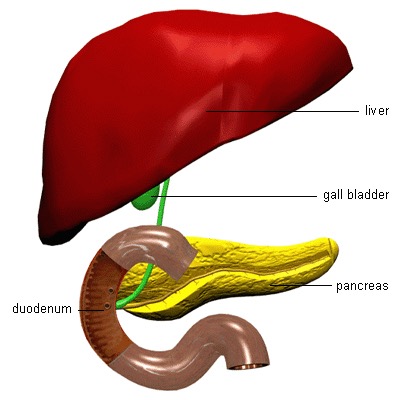 The presence of gallstones may indicate that gallbladder disease is present. Symptoms may include light colored feces that float, constant pain below the breastbone that shoots up into the right or left shoulder area and transfers to the back.  It can be accompanied by fever, nausea and vomiting. Attacks often occur in the evening and can last from 30 minutes to several hours. The urine may be tea or coffee colored and one may experience shaking and chills.  Sometimes, a gallbladder attack may mimic a heart attack. Seek treatment for severe pain that does not go away.

Anyone that has had their gallbladder removed should be particularly diligent about improving their diet.

Removing an organ does not improve health.  It may reduce symptoms but it does not cure the underlying cause that brought about the symptoms in the first place.

Those that must have their gallbladder removed are sick and unless the conditions that brought about the disease in the first place are not changed, they are still sick after the gallbladder and pain are gone.  Other symptoms may present elsewhere later.  Gallbladder disease can be the result of a deficiency of neutralizing minerals in the diet.  These are primarily found in vegetables and fruits. One of the functions of the gallbladder is to reclaim sodium from the liver bile.  Without a gallbladder the ability to recycle sodium is lost reducing the available sodium even more. Unless those who have had their gallbladder removed add enough alkalizing foods in the form of vegetables and fruits to their diets, their bodies are still in danger of becoming too acidic. The problem has not gone away.

Unless the minerals are supplied by the diet, the body will find another source to carry out the function previously supplied by the sodium in the gallbladder. Calcium is the most readily available substitute for sodium and the best source of calcium is the bones. This process can lead to osteoporosis.

Herbs that can help support the gallbladder

Foods to consider adding to your diet for supporting gallbladder function are:

Eat these foods in moderation:

If you have severe symptoms, omit these foods entirely as they may contribute to further suppressing the gallbladder function and flaring symtoms:

Often there is more than one issue going on in the body at any one time.  Everything is connected and sometimes the body needs to work in a prioritizing sequence. Don’t be alarmed if multiple supplements are suggested by your healthcare professional.  It can be very beneficial to support several different systems and organs of the body as we assist it to heal.

You can download and print the free reference brochure here!

This website uses cookies to improve your experience while you navigate through the website. Out of these, the cookies that are categorized as necessary are stored on your browser as they are essential for the working of basic functionalities of the website. We also use third-party cookies that help us analyze and understand how you use this website. These cookies will be stored in your browser only with your consent. You also have the option to opt-out of these cookies. But opting out of some of these cookies may affect your browsing experience.
Necessary Always Enabled
Necessary cookies are absolutely essential for the website to function properly. This category only includes cookies that ensures basic functionalities and security features of the website. These cookies do not store any personal information.
Non-necessary
Any cookies that may not be particularly necessary for the website to function and is used specifically to collect user personal data via analytics, ads, other embedded contents are termed as non-necessary cookies. It is mandatory to procure user consent prior to running these cookies on your website.
SAVE & ACCEPT